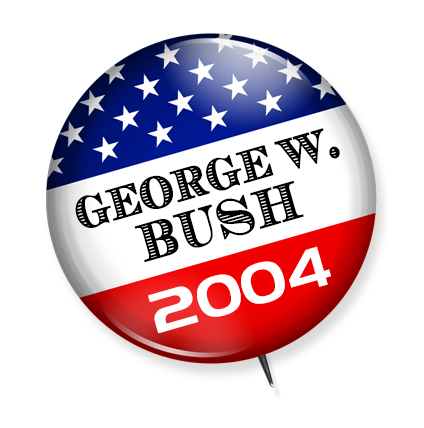 Make Your Own Maps do not include state splits due to district system rules or faithless electors.
If the historical map for this year had a split state vote, the electoral total when clicking " Map" will not be correct.
2004 State-by-State Vote
click rows to view electors
Archived Election Day Live Blog - 2004
3:21:38 PM - Welcome to our 2004 election night coverage! You'll notice that, unlike other sources, we have already projected most of the states to a candidate. Yes, it's possible some of those are wrong, but by focusing on the true Electoral College battlegrounds we can more clearly see what is important. I tried to be overly cautious when deciding which states to not color in. If there was any question in the last few weeks about where the state stood, we left it blank.

Feel free to email questions or comments. I can't get to them all, but I'll mention the ones I think most people will be interested in. Please keep in mind that President Elect in an objective, non-partisan site - so no political mudslinging please!

The first polls will be closing in about 3.5 hours, so let's see what will happen!

3:34:53 PM - A few questions I can answer quickly since nothing else is going on yet!