2020 Electoral College Analysis
James R Whitson / October 27, 2020
email the author
We're one week away from President Elect 2020! As I mentioned in a previous article, I've taken a step back from how I ran the site in previous years. But I still wanted to give you a little preview of how things might turn out.

Despite what you may hear from most news outlets, this race is not a runaway. Both candidates have legitimate pathways to the presidency. Below I'm going to go through some of the numbers as I see them. Remember, as I've said every election year since I started this site 20 years ago: I am completely non-partisan when it comes to these analyses! My goal is not to promote a candidate, but simply to stoke my ego by being right! (But I blew it bigly in 2016!)

As of today, I believe that Biden has 203 safe electoral votes and Trump has 125. That leaves 210 toss-ups. That would mean Biden's absolute ceiling is 413 votes, while Trump's would be 335, assuming a candidate swept all the toss-ups. 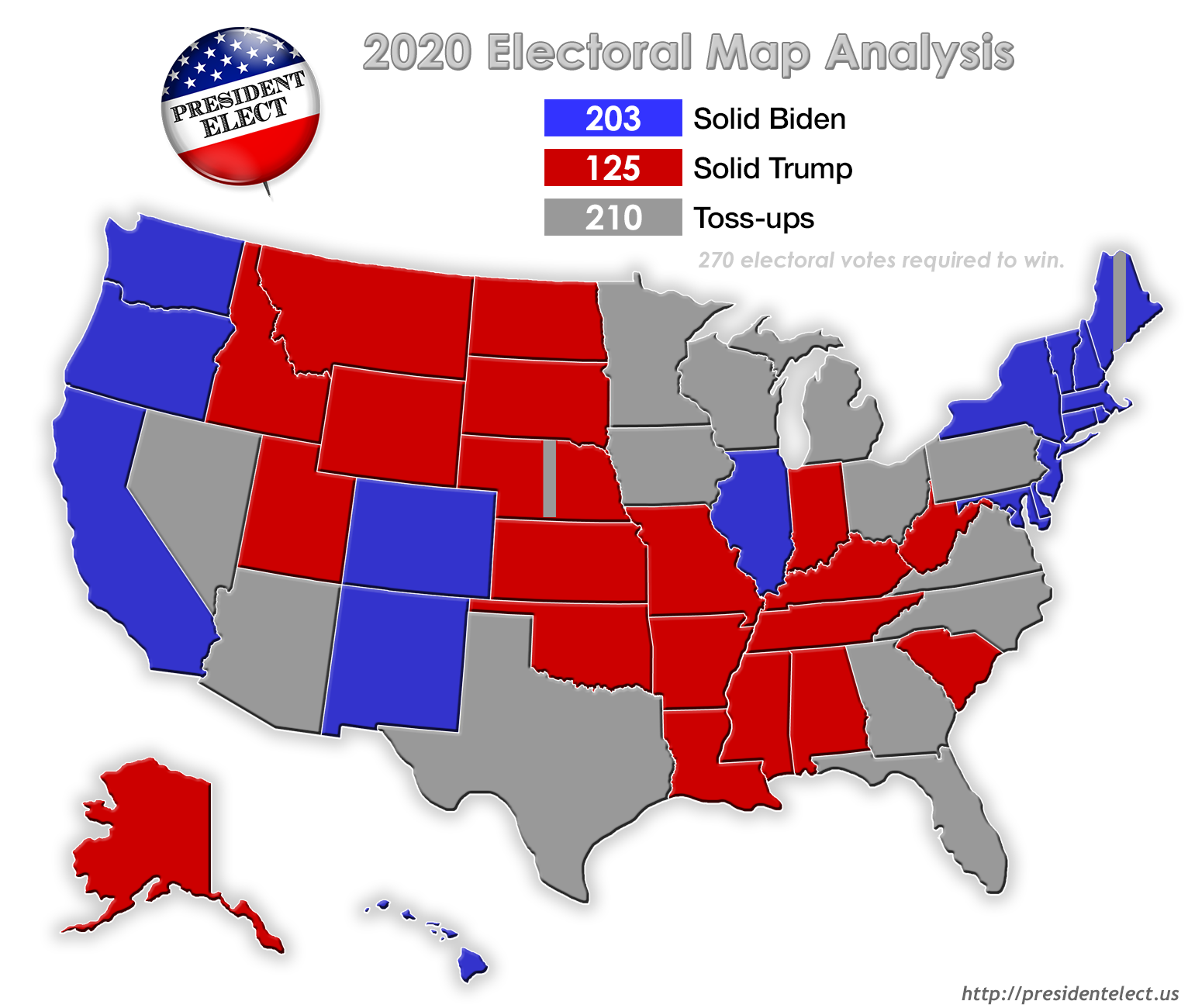 I'm not making any official picks in 2020, but back when I did, I never allowed myself to have toss-ups. So if I were still making a projection, looking at the polls, historical trends, and the campaign in general, I would move five of the toss-ups to Trump and three to Biden. Admittedly, there are some major assumptions here, but that was the whole point of not having toss-ups... back when I did that sort of thing... which I'm not doing anymore...

These would be the states I would move, in order from my most sure to least. 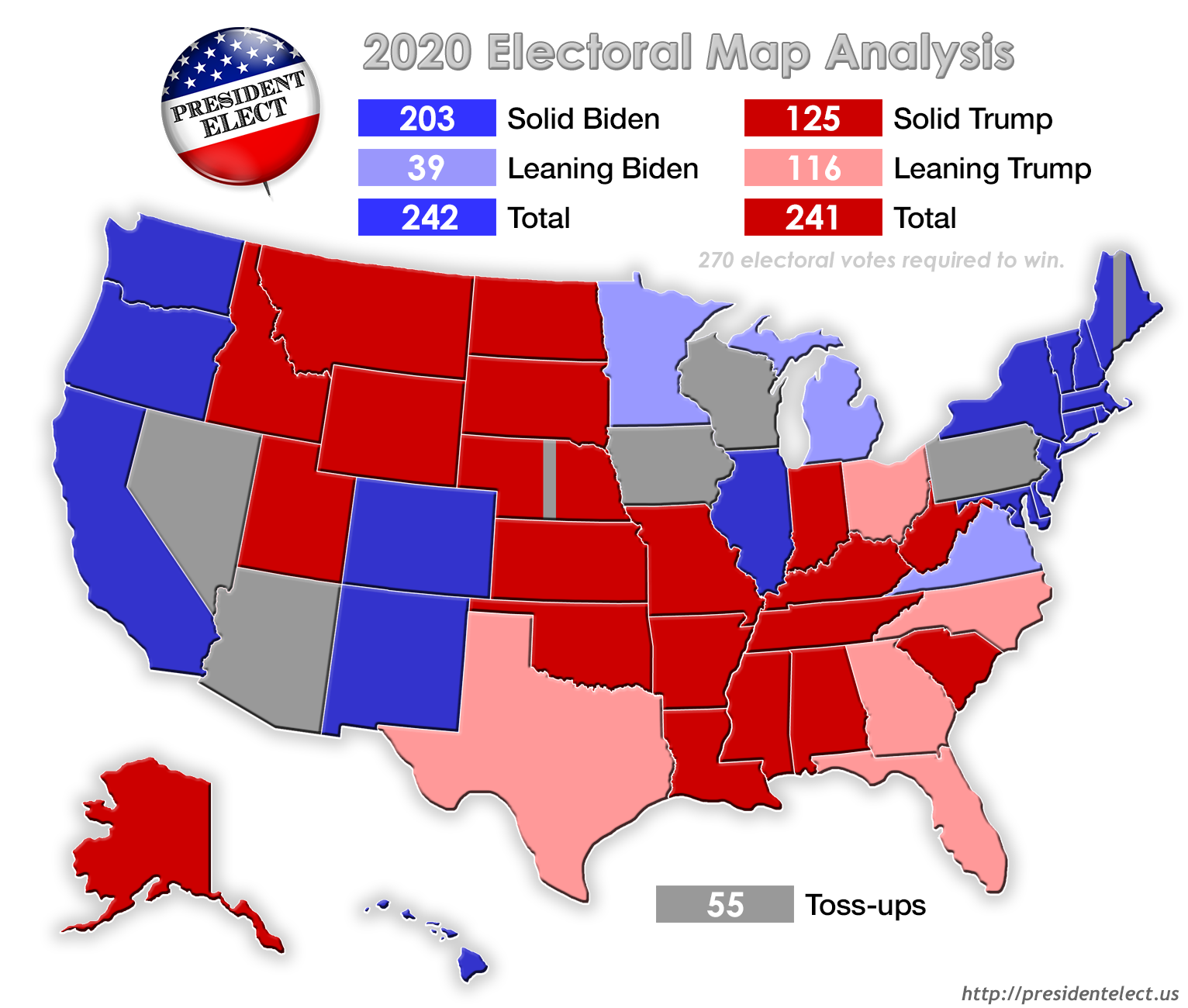 This is a pretty good stopping point. But if I were going to go a bit further...

If you take the above leanings into consideration (and I wouldn't!), the electoral vote would be tied at 258 votes each!

That'd put the race at 260 to 258 in Biden's favor with only Pennsylvania and its 20 electoral votes left on the board. And I'm afraid I'm going to leave you hanging! I will say this though.

I have a few final thoughts when it comes to the 2020 election:

Pollsters claim they have fixed the problems that haunted them in 2016. If so, this election could go in a very different direction! But pollsters have said they've fixed their problems several times over the years I've been running this site, so we'll see.

There is one poll that I would be most concerned about if I worled on the Biden campaign. And that is a recent Gallup poll. Just about every election year since 1984, they have asked the question "Are you better off today than you were four years ago?" One would assume that with Trump as president and knowing his usual favorability ratings that this question would yield a low positive response. Throw in a once-in-a-hundred-years pandemic, and surely most would answer in the negative. Counterintuitively, that is not so. In fact, the response to this question was the most positive that Gallup has ever recorded! 56% said yes, they are better off than four years ago. This was the first time Gallup has returned a number over 50%! It's hard to gauge the mood of the electorate when you see polls like that along side polls showing Biden with a nationwide lead. Yet another reason to be weary of polls going into election night.

In 2016, I noted that Trump was getting massive support at his rallies in numbers we didn't see at Clinton stops. 2020 is playing out very much the same if not moreso, with Biden campaign stops seeming like ghost towns next to Trump's huge events. How much of that is due to enthusiasm issues and how much is down to the coronavirus remains to be seen.

Despite those last two points, Biden's biggest strength is he's not Trump. And for a very large number of voters, that is all they need to hear!

2020 has been an unpredictable year. And that could carry into the election. I started off this article with a map showing 210 toss-up votes and the electoral ceilings for each candidate. Start there. Don't just blindly accept my take. Any outcome between the toss-up map and those ceilings is just as plausible as my analysis! I'm just giving you one of many potential readings. This is very much anyone's election.

Finally, whoever wins this election, please, let's all remain civil. We are all more similar than we are different, even though the most partisan on both sides won't admit it. The peaceful transfer of power we enjoy in the country is a gift we should not take for granted.

I will most likely do some sort of live blog on election day, so hopefully I'll see you all next week!